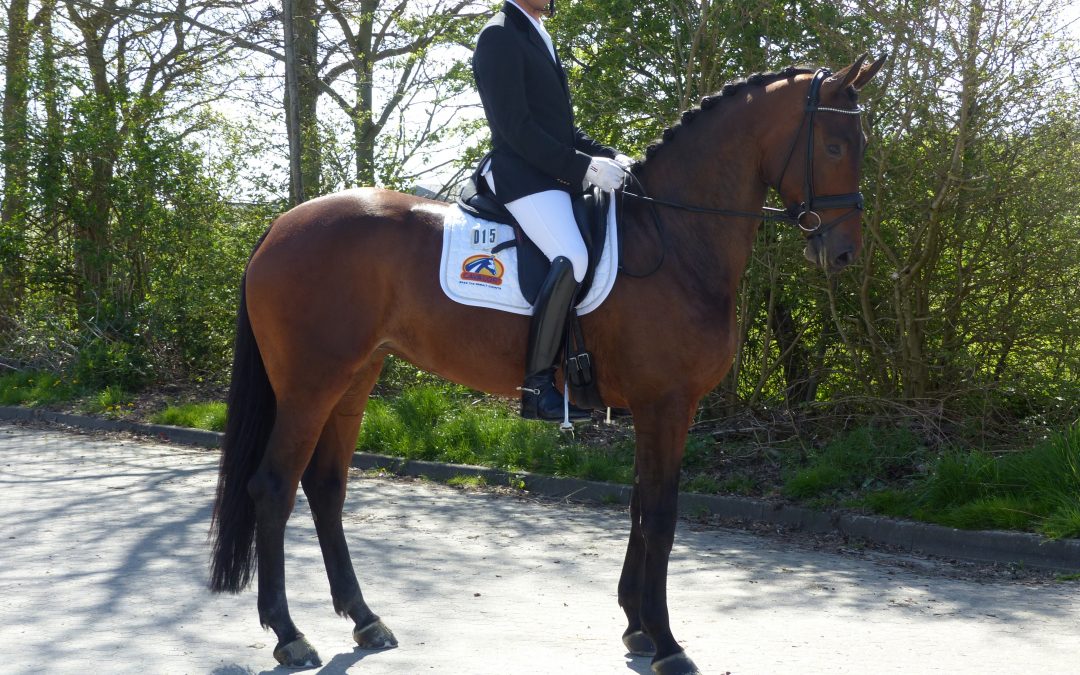 Gold Apple exceptional class Today’s IBOP in Barsingerhorn did not enter the books as the biggest, yet all jumping mares succeeded and there were notable horses. The highest points in the dressage direction, 84 in total, went to Totilas daughter Gold Apple.

Judges Henk Dirksen and Dirk Reijne were able to pass five of the eight dressage mares presented, with Gold Apple being a class apart. This daughter from Totilas out of the preferent sport-dr-mare Oogappel (s.T.C.N. Partout) from breeder Nico van Maaswaal from ‘t Goy earned 84 points thanks to the nines for the canter and the posture and balance. She also received an 8.5 for the trot. Dirk Reijne: ‘This mare cares herself very good and has a lot of strength from the hind leg, especially in trot and canter. The walk was sometimes a bit short/long, giving them a 7.5, but it is a complete dressage horse with a lot of front. The striking power and enormous strength from the hind leg show that she offers a lot for the higher work. ‘ Thanks to this result, Gold Apple, a daughter of the Oogappel ridden by Aat van Essen in the international Grand Prix, became elite today. President’s First Apple, a son of Vivaldi and Oogappel, is classified in the ZZ-Zwaar and from this line, which also has a very successful jumping branch, comes the international Grand Prix dressage horse Sierappel (by Montecristo). His son Foco Loco-W under Borja Carrascosa presents itself internationally at Grand Prix level.

Nico van Maaswaal and his partner Simone have been working for many years to improve the bloodlines in their stud farm. For this he has selected the best stallions, suitable for his broodmares. His products reach the highest level in sport (dressage and jumping). His products are also highly appreciated by fellow breeders. Simone van Maaswaal talks about the IBOP today: ‘It was a hectic day but certainly with a nice result. Patrick van der Meer rode Gold Apple today and we really appreciate that. He did this for us because he also rides the half brother of Gold Apple, the Vivaldi son President’s First Apple. Both Gold Apple and First Apple are at Van der Meer’s stable. Patrick noticed many similarities between the two horses today and was positive about it.’ She continues: ‘The fact that the mare is easy to ride was also evident from the jury’s comment:’A class apart’. The jury praised her for her movement mechanism. That is always nice for a breeder to hear ‘. A four-year-old daughter of Oogappel is currently highly in foal by Toto Jr. and a three-year-old daughter will hopefully be offered studbook inspection this summer. Source: KWPN / Hoefslag