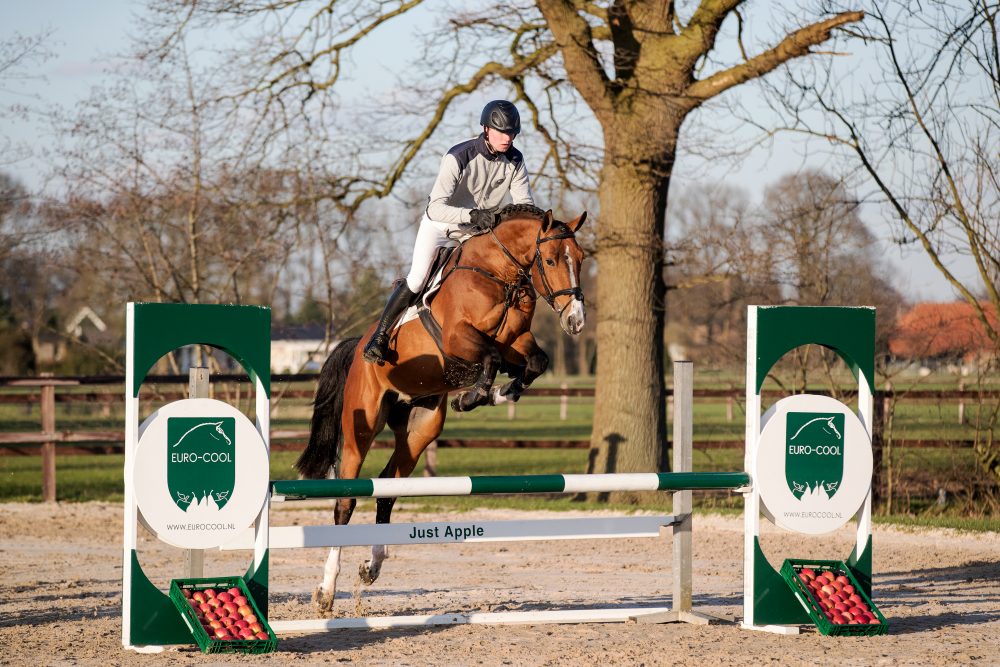 Just Apple was approved at the KWPN studbook in 2017. We’ve translated a piece of the inspection report.

Lineage:
Just Apple is a son of keur stallion Verdi, who won team silver at the Olympic Games in 2012 and was a fixture for the Dutch team under Maikel van der Vleuten for years. They won team gold during the WEG in Caen in 2014 and gold at the European Championships in 2015. Two sons from Just Apple’s mother Ulina du Rouet (by.Baloubet du Rouet) – one from Vigaro and one from Canturano – reached KWPN’s second round viewing, this both stallions are now classified in the 1.35m. Baloubet du Rouet won individual gold under Rodrigo Pessoa during the Olympic Games in Athens and won the World Cup Finals three times.
Ulina’s mother Pralina descends from the keur stallion Karandasj, who himself was active to the highest level with Roelof Bril and Willem Greve. Then we find Notaris daughter Claudia in the dam line, who is the grandmother of the KWPN stallion I Am London Apple (by Carembar de Muze / London). She is also (grand) grandmother of the Grand Prix dressage horse Oogappel (s.TCN Partout), the Grand Prix show jumpers Star Apple (by Kigali) from Gianni Govoni and Wait ‘n See (by Santos) from Frederico Francia, the international jumping horses Amberlina (by Tangelo van de Zuuthoeve), Appelflap (by Silverstone), Charlotte D (by Kashmir van Schuttershof) and Thunder Girl D (by Thunder van de Zuuthoeve).

Veterinary report:
During the investigation, an outer milk tooth broke out. This tooth has been removed.

Breeding advice:
Just Apple can add body use and power.