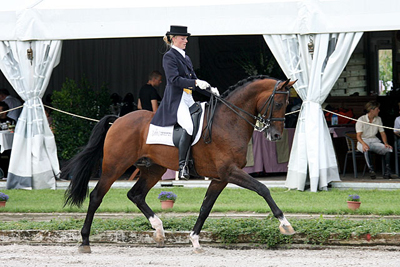 In 2002 presented at the KWPN (2nd view). Then proposed to the SBS (2002 approved, Sieger stallion). Finally proposed by BWP (2003), also approved.
As a 4-year-old champion of Belgium (2003). The Dutch press writes:
IDS (G. Verkerk): “The big brown was the best model of the inspection, a top dressage horse in its line with a best trot and very nice foreleg use.”
Agr. Dagblad (R. Hekkert): “Sierappel impresses with a particularly appealing modern exterior, the trotting is spectacular, although it actually moves a little too big.
As an approved stallion sold to Jaak Achten, after which it was released by his wife Muriel de Ruijter, who was successful at Grand Prix level.
Pedigree on Horsetelex